By Joe Parkinson and Emre Peker

ISTANBUL—Turkey on Friday acknowledged that a surge in its gold exports this year is related to payments for imports of Iranian natural gas, shedding light on Ankara’s role in breaching U.S.-led sanctions against Tehran.

The continuing trade deal offers the most striking example of how Iran is using creative ways to sidestep Western sanctions over its disputed nuclear program, which have largely frozen it out of the global banking system. 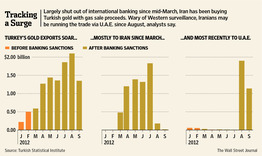 The disclosure was made by Turkey’s Deputy Prime Minister and top economic policy maker Ali Babacan in answers to questions from the parliamentary budget committee.

Iran provides 18% of Turkey’s natural gas and 51% of its oil. But since U.S. and European Union sanctions ban Tehran from receiving payments in dollars or euros, Ankara pays Iran for the gas in Turkish liras. The lira is of limited value for buying goods on international markets but ideal for purchasing Turkish gold. The government hasn’t specified how it pays for Iranian oil.

“In essence, gold exports [to Iran] end up like payments for our natural gas purchases,” Mr. Babacan said. “Turkey is depositing the payment for the gas we purchase from Iran to Iran’s account in Turkey…I don’t know exactly how they then transfer it,” he said.

The identity of the final destination of the gold in Iran isn’t known, but the scale of the operation and its dramatic expansion suggest the Iranian government plays a key role, analysts say.

In Turkey, state-run lender Turkiye Halk Bankasi AS has been responsible for processing the payments, since the U.S. adopted a measure in January to stop dealing with financial institutions working with Iran’s central bank, freezing out private Turkish banks from facilitating payments. Halkbank raised 4.5 billion liras ($2.5 billion) Monday in Turkey’s biggest offering in a secondary share sale-a 20.8% stake, according to a statement to the Istanbul Stock Exchange.

Mr. Babacan’s remarks Friday helped clarify an aspect of Turkish trade policy that has been a source of speculation since unusually high exports to Iran first appeared in March, the month Iran was cut off from the Swift global payments network, effectively blocking the country from performing international financial transactions.

Tehran has sought alternative means of payment for energy exports—its main foreign currency earner and economic lifeblood—including renminbi and rupees, as well as gold, in an attempt to skirt international sanctions and pay for its soaring food costs.

Analysts cautioned that although the trade with Iran wasn’t illegal, Ankara wanted to keep details out of the public eye for fear of raising the ire of Washington, which is leading the international push against Tehran for its alleged push to develop nuclear weapons. Iran says its program is for peaceful purposes including medical treatments.

Turkey sold $6.4 billion of gold to Iran in the first nine months of this year, up from just $54 million in 2011, according to official data, tripling Ankara’s exports to its eastern neighbor and almost evening the trade balance that historically has been dramatically in Tehran’s favor. Iran accounts for 60% of Turkey’s gold exports this year, followed by the United Arab Emirates with 30% of the total.

Those transactions also helped cut a gaping Turkish current-account deficit to 7% of gross domestic product in September from an unsustainable 10% at the end of last year and improved Turkey’s short-term external financing needs—a key development that this month that enabled Ankara to secure its first investment-grade credit rating in almost two decades.

The glittering bilateral gold trade has supplemented a strong trading relationship. Despite tightening sanctions, Turkey’s total trade with Iran rose 50% to a record $16 billion in 2011. The countries have already surpassed that peak with $18.8 billion in almost evenly split exports and imports in the first nine months of this year.

Although Turkish gold sales to Iran spiked parallel to U.S. and European Union sanctions, August and September saw bullion exports shrink amid a jump in sales to the United Arab Emirates, leading to speculation that the gold is now traveling to Iran through the U.A.E.

“Historically, Turkey is a gold importer due to demand from the jewelry industry, albeit it seems that current gold exports are related to demand from the U.A.E. and on to Iran. There has been concern that these sales somewhat reflect illicit trade with Iran,” said Tim Ash, head of emerging markets research at Standard Bank PLC in London.

Traders in Istanbul’s famed Grand Bazaar, which still plays host to a significant percentage of Turkey’s gold trade, have speculated for months that Iran’s government had been behind the bullion buying spree, since there was no discernible increase in the amount being purchased by traditional Iranian customers or tourists.

The government has denied direct links between the role of rising gold sales in buying energy, with Energy Minister Taner Yildiz saying in July that Turkish importers were paying for gas and oil in dollars and liras as per their purchasing agreements.

“This is a statement of what until now has seemed obvious, but was officially kept under wraps,” said Robert O’Daly, a Turkey analyst at Economist Intelligence Unit in London. “As long as Turkey is importing gas from Iran, the gold exports will continue to be substantial.”

While ties between Tehran and Ankara have become increasingly complicated in the past two years, as the Arab uprisings have polarized foreign policy aims, the neighbors have enough mutual interest to maintain a healthy trading relationship. The countries split most recently over the Syrian conflict, where Iran supports President Bashar al-Assad, while Turkey backs rebels seeking to oust the regime in Damascus.

Get notified of new articles from Gonzalo Schwarz and AIER. SUBSCRIBE